One of two shorts celebrating Castaways Sculpture Awards 2020, the City of Rockingham’s signature annual art event. Features participating artists Lee Gath and Janice O’Meara. The exhibition is held on Rockingham Foreshore, Western Australia, from 24 October until 1 November and features a main exhibition on the beach, schools entries on Churchill Park and a Maquette and Small Sculpture Exhibition at Rockingham Arts Centre, a short stroll from the Foreshore. All works are created from recycled and repurposed materials.

The second of two shorts celebrating Castaways Sculpture Awards 2020, the City of Rockingham’s signature annual art event. Features participating artists Lee Gath and Janice O’Meara. The exhibition is held on Rockingham Foreshore, Western Australia, from 24 October until 1 November and features a main exhibition on the beach, schools entries on Churchill Park and a Maquette and Small Sculpture Exhibition at Rockingham Arts Centre, a short stroll from the Foreshore. All works are created from recycled and repurposed materials.

Acclaimed aerial photographer Richard Woldendorp AM proves age is no barrier to creativity, taking to the skies at the age of 92 for a new 15 minute film screening at St John of God Murdoch Hospital in conjunction with a major exhibition of his work titled Abstract Earth and St John of God Health Care New Acquisitions. The film also features pilot Jan Ende who has been flying with Woldendorp for over 50 years, and provides a unique insight into how the State Living Treasure and five-times WA Canon Professional Photographer of the Year and ACMP Hall of Fame inductee works to produce his stunning aerial images as seen in 27-plus books and through 52 solo exhibitions over his career. Produced by the Artist’s Chronicle for St John of God Health Care.

In a collaboration between Pilbara and Kimberley Aboriginal Media, Audio Chemistry in Melbourne and the Art Gallery of WA, the Artist’s Chronicle has produced a trailer and short film for the exhibition featuring participating artists, stunning drone shots of the Kimberley landscape, and music by Kimberley favourites, the Pigram Brothers. The short film is narrated by nationally recognised Indigenous visual and performing artist Barry McGuire. The film screens in the Art Gallery of WA concourse and the Perth Cultural Centre screen outside PICA, as well as on the AGWA website. The film provides viewers with an insight into the project and acts as a reminder of the backdrop of the vast and outstanding Kimberley landscape where artists create.

Desert River Sea: Portraits of the Kimberley is part of the Perth Festival, on show at the Art Gallery of Western Australia until 27 May 2019.

Exhibiting in Australia since 2000, Perth artist Miik Green is set to tackle his first international show at Le Pavé d’Orsay gallery in central Paris in September 2018. Green’s practice celebrates the transformative aspect of mixing unlike materials, and out of the clash, conflict and resistance, new forms emerge, appearing as if pressed between glass plates under a microscope. During the process of creation, the artist becomes both an agent and facilitator of their metamorphosis, and the studio a site of transformation as the mediums develop beyond the artist’s control over several days.

Green studied at the WA School of Art and Design, Edith Cowan University and Curtin University. He is a researcher and advocate for contemporary art in Western Australia, contributing as a panelist for the Australia Council, and is a former chair of Artsource, Western Australia’s artist agency. He contributes to the discourse of art as an associate editor for two international art journals, as a presenter at international conferences, and is a published author. In 2015 he was awarded a doctorate in arts practice through Curtin University. His practice extends to public art and sculpture with previous inclusions in Sculpture by the Sea Cottesloe and Bondi.

Independent curator Kate Mullen brings together 14 leading contemporary Aboriginal artists from around Western Australia whose works attest to the reality of a living and modern Dreaming. Mullen spent over three years in remote Western Australia and the Northern Territory exploring her long term interest in Aboriginal stories and Dreaming. The exhibition, Dream Mine Time, includes sculpture, drawings, paintings, and an iron ore sand animation.

Participating artist Curtis Taylor is not sure what his grandfather did wrong to be exiled from his Martu community, and doesn’t know his name because his family won’t speak his name. The only access he has to his grandfather is through the songs he composed. For this exhibition Taylor created tongues carved from wood collected from his grandfather’s Country, inscribed with the words of these songs. “The songs came out from his tongue, from his dreams to his tongue,” says Taylor.

Direct from the Venice Biennale, and on show at John Curtin Gallery in Perth, Western Australia, Lisa Reihana: Emissaries reimagines, in an act of cultural reclamation, Captain Cook’s encounters with the First Nations people of the Pacific. This interview features the centrepiece of the show, the epic video, in Pursuit of Venus (infected), 2015-17, where Reihana incorporates performers into a static artwork. The work was inspired by the 20-panel French Neoclassical wallpaper Les Sauvages de la Mer Pacifique, created in 1804-05, which depicts Pacific Islanders as European in appearance, inspiring Reihana to include “real people with real Pacific bodies” in the work.

The exhibition includes antique telescopes, plus 18th and 19th century works on paper from the Kerry Stokes Collection, and the specimen cabinets of Joseph Banks.

Ten years in development, the concept of Luda Korczynskyj’s exhibition at Gallows Gallery began when her daughter was suffering from anorexia nervosa. Along the way, the show morphed into an exhibition exploring how women can be challenged through difficult times and come out stronger – physically, mentally and socially.

Syndicate lll: The Council by Stuart Elliott explores intentionally-obscure histories and realities in the third Commission by philanthropist group the Syndicate. On show at Bunbury Regional Art Galleries, Western Australia from 25 November 2017 until 4 February 2018.

This episode features Tony Jones in his studio, at home, and pursuing his love of sailing. A teacher of art for over five decades, Jones has influenced hundreds of students. We explore how public art became a major part of his practice, from the much loved anonymously adorned Eliza on the Swan River to his depiction of CY O’Connor at CY O’Connor Beach. In 2008, Jones was named Western Australian Citizen of the Year, and in 2009 he received the Order of Australia medal for services to the visual arts as a sculptor and educator.

Episode 1 of a series featuring artists with works in the St John of God Murdoch Hospital Art Collection. In this Episode: From his cluttered studio at the University of Western Australia, to the unusual home he built in the Perth Hills, Hans Arkeveld talks about his work in the collection, emigrating from Holland as a child, and his father being forced to work for the Gestapo.

Frances Andrijich is one of Australia’s finest photographers. Her extraordinary images have earned her a growing national and international reputation. She has produced over a dozen books and won numerous awards for photography. Her subjects have included the Dali Lama, Hugh Jackman, Heath Ledger, Kerry Stokes, Shaun Tan, Janet Holmes à Court, and of course, the Australian landscape.

Of Ghosts and Angels 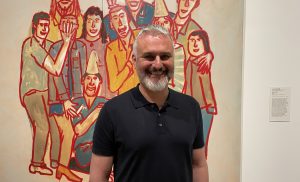 Directing the Art Gallery of WA 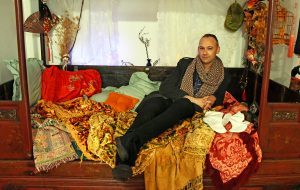 Of Ghosts and Angels

November 18, 2022
Privacy Policy
The Artist’s Chronicle acknowledges Aboriginal and Torres Strait Islander people as the traditional owners of Country throughout Australia and pays respect to Elders past and present.
Copyright © Artist’s Chronicle
Scroll to Top