A much-anticipated major survey of London and Melbourne-based Aboriginal artist Dr Christian Thompson AO opens 17 May at John Curtin Gallery. One of Australia’s leading, and fascinating contemporary artists, Thompson made history in 2010 when he became one of the first of two Aboriginal Australians to be admitted to Oxford University in its 900-year history. His work explores notions of identity, cultural hybridity and history. Formally trained as a sculptor, Thompson’s multidisciplinary practice includes photography, video, sculpture, performance and sound. In his live performances and conceptual portraits he inhabits a range of personas achieved through handcrafted costumes and carefully orchestrated poses and backdrops.

Born in South Australia, Thompson’s father’s career in the military meant frequent resettling. His heritage is a cocktail of English, Irish, Scandinavian, Jewish and Aboriginal. His great-great-grandfather was the renowned King Billy of Bonny Doon Lorne, a senior tribesman of the Bidjara people of south-western Queensland, and family holidays were spent in the bush learning his father’s culture.

Christian Thompson: Ritual Intimacy at John Curtin Gallery includes a major commission created for the exhibition. The ambitious multichannel composition featuring Bidjara song, expands on his signature sonic experimentation, and invites viewers into an immersive space of wall-to-wall imagery and sound. “Bidjara is officially an endangered language,” says Thompson. “My work is motivated by the simple yet profound idea that if even one word of an endangered language is spoken it continues to be a living language.”

Thompson’s video Refuge, 2014 was recently shown in the group exhibition Love, Displaced at Lawrence Wilson Art Gallery. In it Thompson is placed in the direct centre of the frame, a position usually reserved to attain maximum attention, and sings of brotherly love in his Bidjara language. Thompson says the new commission has provided the opportunity to create a work more complex musically, and more textured sonically. “I wanted it to be more intricate with my use of language. At one stage I’m singing on one screen and then other versions of me appear singing the melodies.” 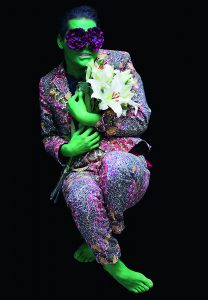 The exhibition was part of Monash University Museum of Art’s Australia artist series, and is curated by its director Charlotte Day. Guest curator is Hetti Perkins, a long-time curatorial collaborator with Thompson, and the writer and presented of art + soul, the ABC’s acclaimed television series covering contemporary Aboriginal and Torres Strait Islander art. Thompson was accepted to Oxford University on an inaugural Charlie Perkins Scholarship, established to honour Hetti’s famous father – a leader and activist, and the first Aboriginal Australian to graduate from University. She says the exhibition is well-earned recognition for Thompson’s work.

“Christian has spent periods of his adult life, as a practicing artist, away from home, but there is a common thread in his work, and it’s this connection to home or Country,” Perkins says. “In terms of the rituals or rites of the exhibition title, he is constantly reiterating that connection to home – through words, through performance, through his art, through ideas and writing. Alongside performance and ritual, Thompson’s concept of ‘spiritual repatriation’ is central to his work.”

Indeed at Oxford University, Thompson’s exhibition We bury our own, at the Pitt Rivers Museum was inspired by its photographic collection of Indigenous Australian communities, the archive coincidently set to be repatriated under a project funded by the Australian Research Council at the time he was there. Rather than peruse the images electronically, Thompson opted to meditate on the physical images intermittently in the Museum space. “It pushed me into a new territory,” says Thompson. “I felt obligated to do justice to the archive as one of the first Aboriginal people to study at Oxford University, and to perform a spiritual repatriation rather than a visual repatriation of the images. The idea of spiritual repatriation was about setting something free and providing a new platform, or gateway to think about these kinds of collections. It wasn’t necessarily a comment on the collection, but a departure point from the archive into the contemporary, and I think that’s something art is able to do, that a physical repatriation perhaps can’t, because it’s not the spiritual content.”

“At Oxford I certainly wasn’t a researcher in the formal sense of the word, but the idea was to get people feeling things rather than always thinking things. I don’t think it was an accident I was at Oxford at that time. I was there for a reason, because artists play an important part in the spiritual repatriation of these collections.”

Thompson has a Doctorate of Philosophy (Fine Art), from the University of Oxford, UK; a Master of Theatre, from the Amsterdam School of Arts; a Master of Fine Art (Sculpture) RMIT University in Melbourne and Honours (Sculpture) RMIT University, as well as a Bachelor of Fine Art from the University of Southern Queensland. In 2015 he was mentored by pioneering artist Marina Abramovic during her residency at Kaldor Arts Project in Sydney. He has exhibited widely, both nationally and internationally, and his work is represented in collections such as the National Gallery of Victoria, Trinity College, Oxford, UK, the National Gallery of Australia the Wagner-Owen Collection in the US and the Art Gallery of WA.

In 2018 he was honoured with an Order of Australia for distinguished service in the visual arts as a sculptor, photographer, video and performance artist, and as a role model for young Indigenous artists.

Christian Thompson: Ritual Intimacy is on show at John Curtin Gallery from 17 May until 21 July and is accompanied by the first monograph of the artist’s work.