Artist and academic Drew Pettifer brings a considered and sensitive approach to the shocking treatment of two young men left to die on separate islands in 1727 after their ‘sin of sodomy.’ 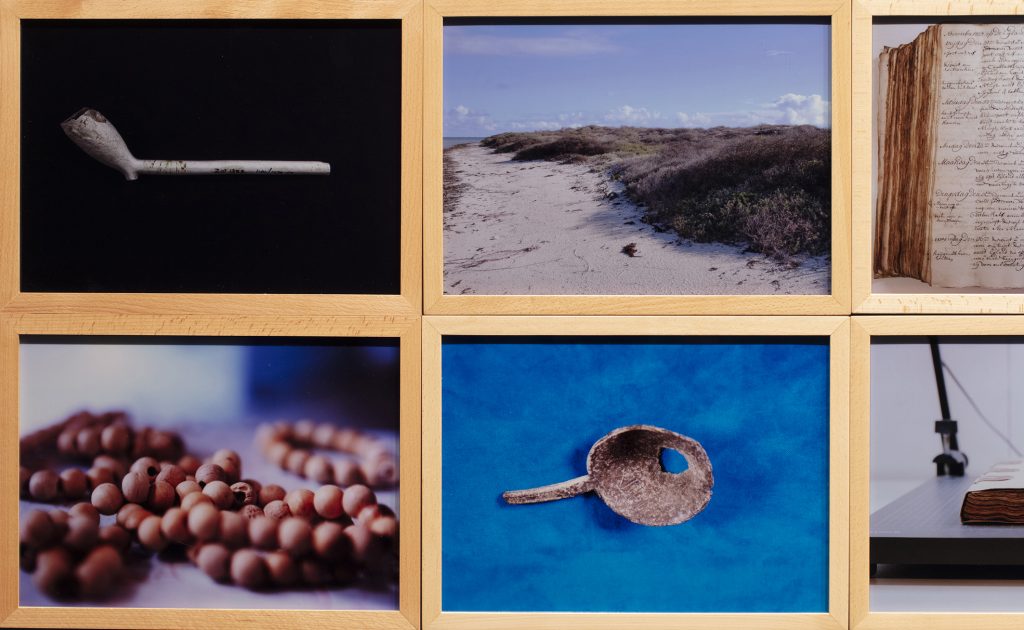 The Houtman Abrolhos Archipelago is well known as a place of human suffering, with numerous shipwrecks littering the ocean floor and countless tales of horror. The scattered islands do not lend themselves to the romance of being marooned on a desert island, but instead lend themselves to being sites of corporal punishment. They are scrub-covered, dry, and mostly waterless. They offer no relief from the battering winds and beating sun. This makes them the ideal open-air prisons for cruel death-sentences.

It is not often that the Abrolhos are thought of in terms of Australia’s queer history, a history that is today still being uncovered after many decades of poor acknowledgement. In the exhibition, A Sorrowful Act: The Wreck of the Zeewijk, artist and academic Drew Pettifer uncovers threads of this history going back to the early 1727 Dutch expedition of the Zeewijk. This ship became wrecked on the Archipelago and the crew set up a base camp on Gun Island. Here events occurred marking the first European record of what was then described as the ‘gruesome sin of sodomy,’ on Australian soil.

The story is not uncovered through personal accounts of the junior sailors involved, Pieter Engelse and Adriaen Spoor, but rather through journal entries from the ship. The writing is impersonal, detailing the discovery of the ‘sin’ and resulting punishment of the sailors being tortured, then taken to be left to die on two separate islands north-east from the base of Gun Island. Pettifer takes this story, presents it and supplements it, giving body to a historical event that was otherwise scant, elusive and obtuse.

This means the exhibition presents as a well-researched, cohesive and meaningful body of work. Pettifer travelled from the Netherlands and Belgium, to the Abrolhos and explored various museum collections to connect all the dots of the story. Through various artifacts, timelines, journal entries, infographics, maps, an installation, video and photographs, we learn not only about the sorrowful plight of these two sailors, but the narrative is expanded to talk about the queer experience more broadly. For example, we learn about sexual orientation laws around the world and laws across various countries, in particular in Australia, concerning the persecution or acceptance of LGBTQIA individuals.

In The Netherlands in Gent, Pettifer found two young men with the same surnames as the sailors, possibly related. These men were receptive to the story and agreed to become a part of a video portrait. Two vertical screens feature these men from the torso up, unclothed, standing, gazing at viewers. Their unflinching stares hold us accountable as witnesses to, if not participants in, a hidden and elusive history. It is the simplicity of Pettifer’s works that gives viewers the space to consider more deeply the significance of the story and its ongoing resonance throughout the centuries since.

With ongoing aesthetic simplicity, there is the recurring image of doubles, as an echo of the two victims. Two buttons uncovered at the site of the wreck are presented alone on a plinth; two small piles, one of sand and one of crushed shells, are given low plinths and two photographs of the two prison islands are presented together on the wall. Through the exhibition, tthe couple, as a stand-in for so many persecuted couples throughout time, will not be forgotten.

Another recurring and powerful image is the empty expanse of the ocean with the faint suggestion of island land in the distance. What should be a soothing sight becomes an ominous one in light of the story. We imagine what it would have been like to suffer such a fate, to be thrown amidst the brutal environment, surrounded by nothing but seemingly endless ocean and unable to swim, all for such a harmless act. The ocean is projected at large scale in a single channel video installation. Over the rise and fall of the gentle waves, Pettifer narrates the story of the sailors, and reflects on Australia’s queer history and troubling attitudes towards LGBTQIA people. However didactic this may be, it holds strongly together with the content of the exhibition.

Pettifer communicates that Australia’s queer history is one which has been predominantly pieced together through institutional accounts of events, like the punishment of the sailors, or other criminalisation over time. There is an absence of first-hand stories from the individuals persecuted. The gaping omissions in this selective history demand to be filled in, personalised and memorialised, as this exhibition does so well.

Effectively, the exhibition is a sensitive blend of the past, of historical and archival material with contemporary material. It presents a broad interrogation of the queer history of Australia from its troubled beginning to the ongoing homophobic laws of Australia. This comes at a prescient time when we still, today, encounter bigoted views at the very heart of Australian society.

A Sorrowful Act: The Wreck of the Zeewijk by Drew Pettifer is on show at Lawrence Wilson Art Gallery until 5 December.